If Bitcoin is ever to become the main medium of exchange, its network need to be lightning-fast and black-Friday-sale-cheap.

Before we delve into the details, let’s talk a bit about network topology.

The network we often picture when we hear “decentralized” is actually one of distributed topology. Where there are no centralized hubs and all users, serve as hubs. Currently, Bitcoin operates in a decentralized, not distributed network. 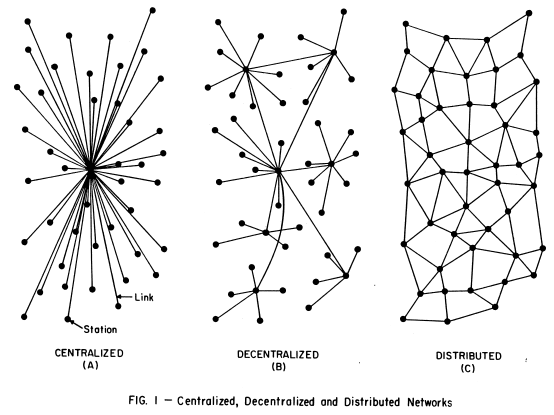 The Lightning Network or (LN) is simply a protocol that enables off-chain channels to exist only between two parties. Once the channel is established the two entities involved can make as many transactions as they want without having to pass through the chain. However, this protocol does not enable the interaction between multiple parties. Meaning that a torrent-like, peer-to-peer, endlessly scalable network is impossible. If you want to refresh your memory on LN, read this article.

There are two main issues that prevent the establishment of a distributed network for payment processing – Network Efficiency and User Capital Availability. Network Efficiency is the number of operations the network needs to perform to execute a transaction. User Capital Availability is the amount of BTC each user needs to have to perform a transaction.  For the math behind this argument check this article out.

The first option does not require the LN protocol. This is how, currently, the Bitcoin network operates. Choosing (1) would settle the balance with two, on-chain transactions.

In case Greg and Mary have an already-established private channel, and one of them has a pre-existing channel with Josh. Option (3) would result in 2 off-chain transactions, sending 10BTC to Josh and settling the 5BTC balance; making it the most efficient choice of all.

Doing a case by case analysis for the best payment method would be impossible for any user who will execute a large number of transactions.

For the repayment of 10 BTC with two on-chain transactions, Greg and Mary must have only the amount each owes Josh, 5BTC, available in their account.

Let’s assume that Josh would initiate the on-chain transaction to pay Josh the 10 BTC. He then has to have 10 BTC available in his account (his 5BTC and Mary’s 5BTC debt) and trust Mary that she will repay him in the private channel. The balance cannot be settled without either Mary or Josh becoming a lender to the other.

In this option, again, we face the same issue. If Greg pays in his private channel to Josh, he has to pay 10 BTC, and then get reimbursed in the Greg-Mary channel.

Both options (2) and (3) show the biggest impediment to the Lightning Network Dream – a gigantic network of debtors and lenders. If more than two parties participate in a transaction, each involved party has to have available in their wallet, the total amount owed by all parties.

Even though a purely peer-to-peer distributed network is impossible with current technology, a decentralized one will soon become reality. Whether the existence of centralized hubs is a stray away from the founding principles behind Bitcoin is yet to be seen.

Do not hesitate and share with us what do you think is the right path for Bitcoin in the comment section below!